Barbara always looked old to me. She was old in my first memories and old when I last saw her. She seemed frozen in time, never changing. I cannot imagine her as ever being a young person. And yet through her blue eyes shone vitality, through her actions youth was declared and her very essence was wrapped in a joie de vivre. To me there was definitely more to Barbara than someone who looked like an old person. She was an enigma, a mystery and an explosion of life as young children, and indeed adults, were drawn to her with a certain inevitability. She was immediately a friend and a co-conspirator to me and would remain so throughout the time I knew her.

I remember wanting to be Barbara’s friend and, aged eight, I believed she wanted to be mine. We would go for long walks, climbing over rocks, chatting away and I never sensed reticence or resentment from her. As a teenager I would go round to her small one bedroom flat in the Barbican and sit, eat and chat, surrounded by books and boxes of photographs and negatives as her canaries flew free around the room, and I knew I was welcome. And as a budding photographer in my early twenties we would rummage through the piles of boxes stacked up around her flat, holding negatives up to the light, admiring prints and discussing the benefits of working with a Rolleiflex. 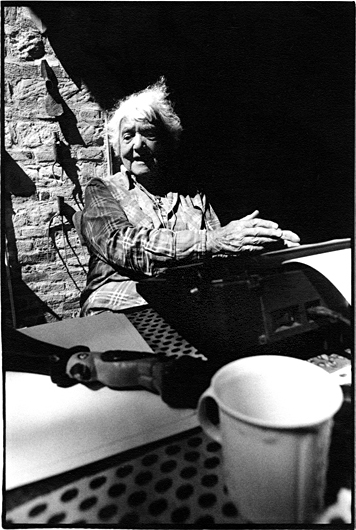 Barbara was a friend of the family. She had, I think, given my aunt Anne Deveson her first job, and had known my father most of his life. Stories of her travels, experiences and adventures were told and repeated throughout my life and I held her, and all she represented, in awe and respect – she was a huge inspiration to me. Whilst I would not wish to change anything about my relationship with her (other than to have made more of an effort to see her towards the end of her life) I do sometimes wish we had had the opportunity to work together professionally. We did talk about it on many an occasion, and explored the possibility of travelling together, writing and photographing from the two extremes of life’s journey, but it never happened.

Occasionally though her professional life did brush up against my world. I was there as she planned her journey by train through Russia, Mongolia and China when she was in her eighties and I listened in fascination and admiration to her stories about the trip when she returned. And in 1995 she decided to write her memoires (one of the many times she made this decision apparently) and she asked me to stand over her and make sure she did. So we went to stay in Italy with my parents and she would sit and relax in the shade at the typewriter and try and write a chapter a day. She had decided to divide her writing into short essays, each one covering news events she had reported on and memorable moments in her life. I would proof read them for her and transcribe them onto the computer. It was a wonderful time, yet you could tell her heart wasn’t in it. She stopped after 9 essays.

Last year I found them all again, hidden in a folder and it was this discovery that has prompted me to write this. I have shown them to Anne (my aunt) who knew her work well and while she loved reading them she too agreed that you could tell her heart wasn’t quite in it. Nevertheless I believe they are worth sharing and should be out there in the public domain for all to read, despite the fact they are obviously first drafts with occasional notes scattered throughout. I will post them all separately as and when I re-type them and link the essays together for your ease.

In the mean time, if you wish to know more about Barbara Wace there are articles and obituaries on the internet (I have linked to a few below). She was, after all something of a legend and was always known as “the last journalist to leave Fleet Street.”