This is a wonderful piece of writing by Barbara and Anne Deveson for Good Housekeeping magazine. It was found by Val Fallan on Google Books and is in a copy of Good Housekeeping: The Best of the 1950s.

I have transcribed the piece below, but please take a look at the scan of the original, it looks fantastic with wonderful illustrations by, as far as I can tell, Harold Bartram.

Unfortunately the text ends abruptly and I cannot find page 50, onto which we are told it continues. 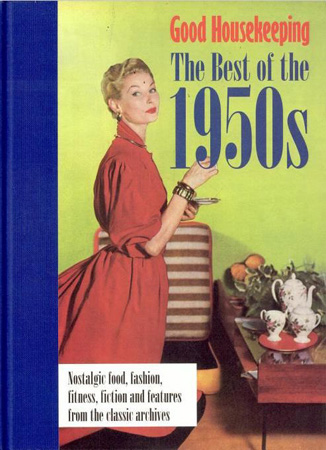 Part of the joy of a holiday is collecting exciting new tastes. Intangible souvenirs, maybe, but often more evocative than a handful of snapshots. You smell crushed rosemary and with a rush of nostalgia you remember meat roasting over red-hot embers in a primitive Greek taverna; a jar of olive oil in a Soho shop brings back to you the old Spanish waiter quoting: Aceite de oliva todo mal quita. (Olive oil banishes all evil.)

Here are some of the dishes which spring to our minds when we talk over our various journeys. They are strictly our souvenirs in tasting, and in no sense a gastronomic guide. Each traveller has his own special meals to remember, and their background events.

Perhaps the most striking thing one discovers is that every country (except our own) prides itself on being a nations of gourmets. Food is an opening gambit of conversation.

We discovered this first in Holland. Confession that we liked their custom of eating cheese for breakfast never failed to gratify our hosts. An old gentleman wearing spats whom we met in a ‘bus was so pleased that he insisted we should be his guests for Indonesian rys tafel. We managed only a third of the dozens of side dishes, but even so it took us every minute of three hours to finish – as he had warned us. There was a wonderful recklessness about that meal; the possibility of missing our boat because we took so long, and , if we didn’t miss it, the reasonable certainty of sea-sickness.

“Nonsense, ” said our friend. “You’ll sleep better than ever”

In Switzerland our culinary quest met with a different reaction. We had ordered fondue in a tiny mountain village, not far from Geneva. The waitress disappeared into the kitchen , voices were raised and then Madame herself bore down upon us, large and terrifying in black. She poured out a flood of incomprehensible French.

“Les Anglaises n’aimant pas le fondue,” was all we could gather. The English reputation for conservatism in food had travelled far. We had to do a lot of soothing before we got our bubbling dishes.

After fondue, tackling spaghetti was child’s play. All the different kinds of pasta would fill a dictionary. A pastificio near Naples, working in his whitewashed basement, gave us thirty for a start. It was also he who described the Neapolitan fisherman’s dish, spaghetti al olio, aglio e